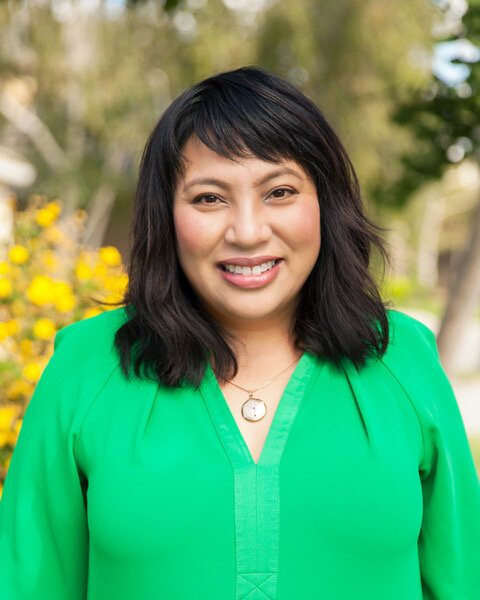 Gayle Romasanta is a writer and artist whose work focuses on the Filipino American experience. She received a BA in Creative Writing from San Francisco State University and an MFA, Writing from California College of the Arts. Her work has appeared on television, radio, online, magazines, and books, such as the New York Times, Smithsonian Magazine, Harvard University’s Education Next Journal, KQED’s The Forum, ABS-CBN and more. Gayle is also the former artistic director of San Francisco’s Bindlestiff Studio, the only theater space in the U.S. devoted to Filipino American storytelling.

As a violinist, she co-composed the first Google Philippines campaign commercial and has performed widely such as at the San Francisco Asian American Jazz Festival 20th Anniversary and the Cultural Center of the Philippines. She also co-wrote the book, Journey for Justice: The Life of Larry Itliong, with the late and great Dr. Dawn Mabalon. Currently, she is an artist-in-residence at Brava! For Women in the Arts, writing and co-composing a musical about the life of Larry Itliong. 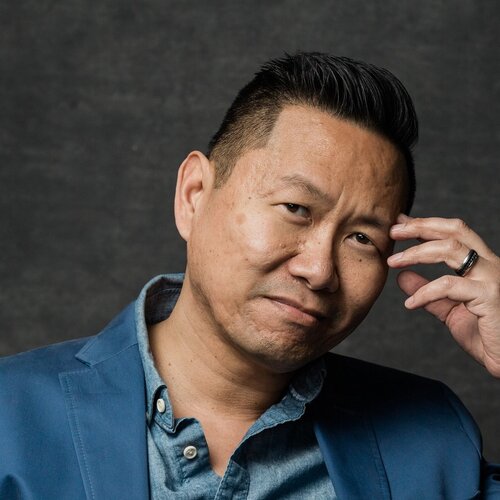 Bryan has been rooted in the Filipino American and arts communities for nearly four decades. He holds degrees in ethnic studies from the University of California, San Diego, and music from San Francisco State University.

In the past decade, Bryan has been featured in nearly twenty musical theater productions in the San Francisco Bay Area, most recently as Tatsuo Kimura in the Bay Area premiere of the musical “Allegiance.” Moreover, he has over twenty years of expertise as a fund development professional with leadership roles at Bindlestiff Studio, United Way of the Bay Area, San Francisco State University, Earthjustice, and the San Francisco Symphony.

Bryan is deeply honored to join Brava as an Artist in Residence to co-compose the first musical about Filipino American labor leader Larry Itliong with Gayle Romasanta. He is a San Francisco Arts Commission’s Individual Artist Commission grantee. 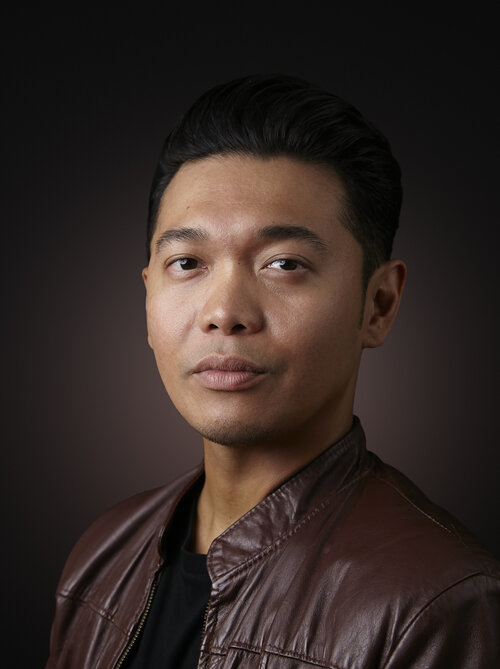 Melvign Badiola is a production manager, stage manager, producer, teaching artist, film, industrial, and stage actor based in Oakland, California. He's a resident artist and a member of the Production Team at Bindlestiff Studio. He tours middle and high schools throughout California with NCTC's YouthAware program which teaches kids about cyber harassment, self love, and mutual respect towards others. 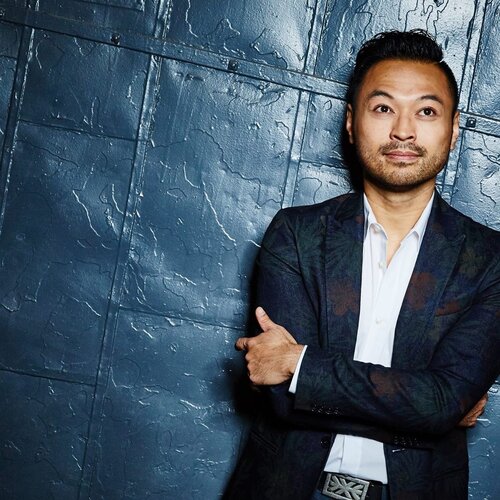 Billy is a NYC-based Performer, Director/Choreographer and Photographer. He grew up in the Maryland suburbs of Washington, DC sandwiched between two gifted and talented sisters. He is the only person in his family who doesn't know how to play guitar. His love for the arts was sparked at an early age when he discovered he could "re-create" the choreography to Paula Abdul's "Cold-Hearted Snake" and "perform" it for his family members. There is a VHS recording of said performance floating around somewhere.

Since then, Billy studied musical theatre at Philadelphia's University Of The Arts and performed on Broadway and regional theaters across the country. He is co-founder of BROADWAY BARKADA, a Filipino cultural organization and is on faculty at JEN WALDMAN STUDIO. He also runs a successful photography business, BILLY B PHOTOGRAPHY.

Billy loves good food, jumping for joy and wandering around new cities. He joyfully makes his living working toward helping others uncover their own "Cold-Hearted Snake" moment. 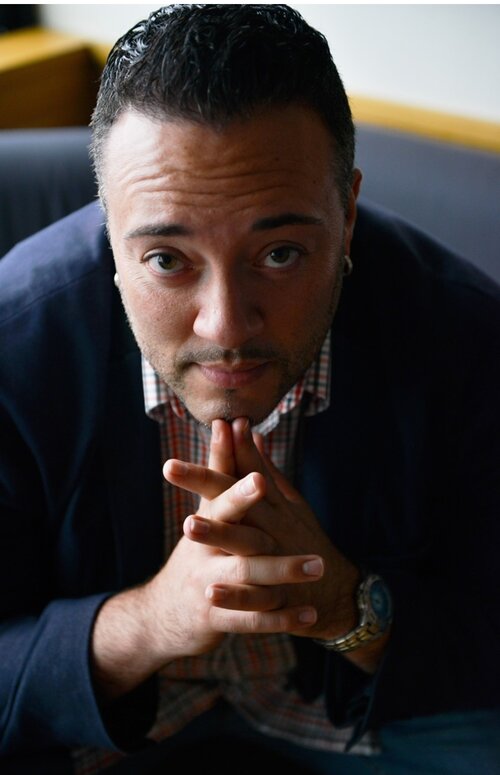 Award-winning Music Director Sean Kana is best known for his work on the 2018 pre-Broadway tour of Ain’t Too Proud: The Life and Times of the Temptations, as the Associate Music Director.  Currently, Sean is the Music Director and Co-Composer/Arranger of a new musical work, Larry the Musical, which tells the story of Filipino American labor leader, Larry Itliong.

Sean has been involved in numerous album recordings and is currently beginning to work on Home, Hope and Holidays Volume II with Broadway by the Bay. Speaking of Broadway by the Bay, Sean has been the Resident Music Director of this theatre since 2012 and his most notable accomplishments are In The Heights (TBA Best Music Direction), Miss Saigon, Les Miserables and Beauty and the Beast.

Sean is the music contractor at Berkeley Repertory Theatre and has worked at other theatre companies, such as Theatreworks, Center Repertory Theatre and more. He has toured to Cuba, China, Italy, France and London and throughout the United States music directing, playing keyboards and singing, giving concerts and masterclasses. Sean has also worked at the Lenaea Musical Theatre festival for five years now.

Sean is an accomplished vocal technician, teaching the fusion of musical styles under the classical technique. Sean obtained his degree from San Francisco State University and is well-known in the Bay Area for being a music director for many different venues. He is a celebrated musician and has a talent for teaching and unleashing creativity. 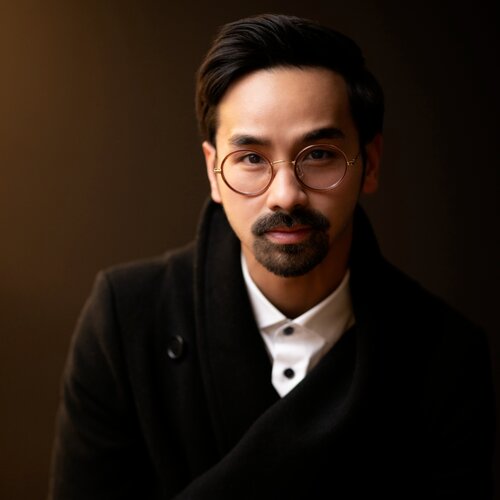 Chris is a born-and-raised Chicago native whose parents hail from Luzon, Philippines. An award winning filmmaker, his work has been featured by PBS, P&G, Sports Illustrated, NBC Sports Network, AMC TV, Disney, and Facebook. He is the Lead Video Producer for the Executive Communications Team at Google and is absolutely thrilled to join this collective of talented creatives and to be a part of this historic project.

When not on the move with a camera in hand or in front of a computer editing away, you can find Chris cycling around NorCal, or relaxing with his wife, Marah, and their dog, Pepper. He also thoroughly enjoys nerding out about film, comics, and discussing survival tactics for a zombie apocalypse. You can find his work at chrisjsotelo.com and on IG @chrisjsotelo. 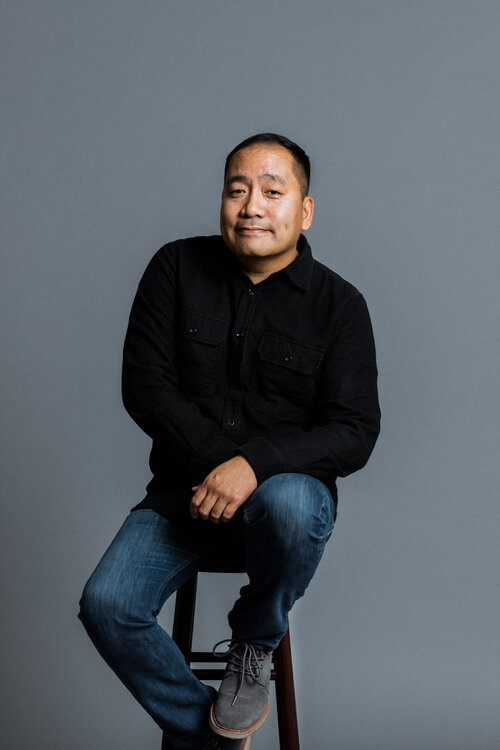 Kevin Camia is a stand up comedian who has appeared on The Late Show with Stephen Colbert and Comedy Central. He is also an actor on the sitcom The Dress Up Gang (hulu) and can be seen in several national commercials.  HIs first experiences in theater include the Asian American Theater Company and Teatro ng Tanan. Later he would become an original member of Bindlestiff Studio with the experimental comedy troupe Tongue in A Mood.  Kevin has written theater, music, and new media for many years.

He is very excited to be working on this project because it's a chance to share his talents and to shed light on Larry's story but ato also recognize the historical contributions Filipinos have made in this country. Kevin was brought in by Gayle Romasanta, a long time friend and collaborator, together they have performed across the country including the Philippines, doing theater and playing music and even sharing the stage with renowned folk artist Joey Ayala. This project is a passion for Kevin, aided by the spirit of Dr. Dawn Mabalon's life's work and her dedication to the community. 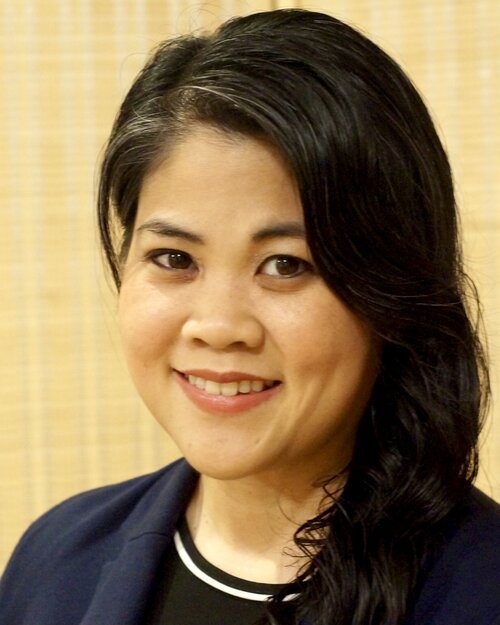 Herna (pronounced “Er-Na”) Cruz-Louie is the Director and Co-Founder for the American Center of Philippine Arts (ACPA), based in Oakland, CA. Herna’s exposure to Philippine dance and music started at the age of 5, when she learned Philippine cultural dances to perform at local town fiestas. In 1995, she graduated from learning Philippine dance in garages and backyards to becoming a performer with PASACAT Philippine Performing Arts Company of San Diego, CA and eventually became an instructor of Philippine folk instruments by the age of 18. After moving to the San Francisco Bay Area in 2000, she performed with LIKHA-Pilipino Folk Ensemble as a musician and instructor, and became their Executive Director from 2005-2008.

Herna was awarded as one of Filipina Women's Network’s 100 Most Influential Filipinas in 2011, and was a featured Asian American Studies Alumna of San Francisco State University in 2014. She completed her Masters in Human Resources Management from Golden Gate University in 2015, and completed her Certificate in Diversity & Inclusion from Cornell University in 2020. She currently serves as the Board of DIrectors Secretary of Kularts, Inc., the premier presenter of contemporary and tribal Pilipino arts, and is the Board of Directors Chair of World Arts West, presenter of the nationally acclaimed San Francisco Ethnic Dance Festival. Herna is a Girl Scout troop leader, and proudly raising her 2 children with her husband in Oakland, CA. 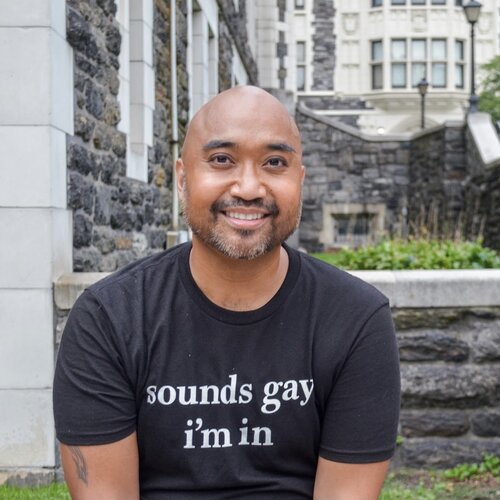 Dr. Kevin Leo Yabut Nadal is a Pin@y Professor, Psychologist, and now Producer. A California-bred New Yorker and scholar-activist, he is the author of 12 books including Filipino American Psychology; Queering Law and Order; and Microaggressions and Traumatic Stress; he is also the lead editor of the upcoming Sage Encyclopedia of Filipina/x/o American Studies.

Named one of People Magazine's hottest bachelors in 2006 and one of NBC's Pride 30 in 2018, he has been featured in the New York Times, Buzzfeed, Huffington Post, CBS, NBC, ABC, PBS, the Weather Channel, the History Channel, HGTV, Philippine News, and The Filipino Channel. He was the first openly gay President of the Asian American Psychological Association; the first person of color to serve as the Executive Director of the Center for LGBTQ Studies; and the founder of the LGBTQ Scholars of Color National Network.

He has served as National Trustee of the Filipino American National Historical Society (FANHS) since 2010 and is currently the FANHS national Vice President.  He has spoken at The White House and the U.S. Capitol, and he has provided consulting services for the Los Angeles Lakers, Google, and more. As a former theater artist, he premiered three one-man shows between 2005 and 2008, with off and off-off-Broadway runs at the Actors Temple, Nuyorican Poets Cafe, Bowery Poetry Club, and the Duplex. 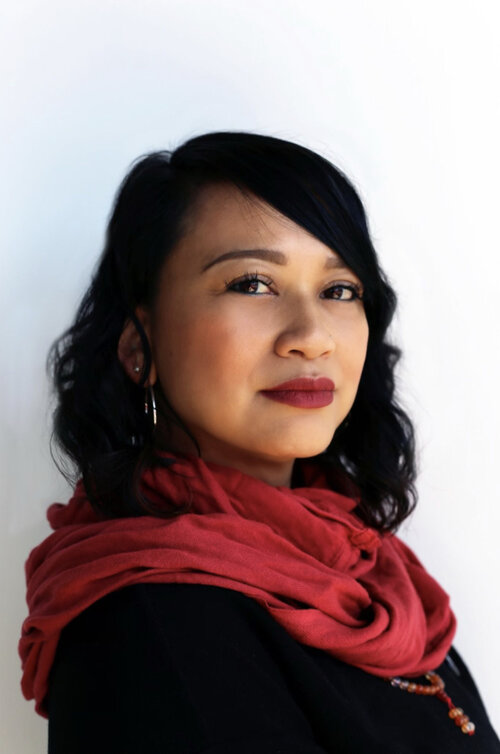 Dr. Tintiangco-Cubales was born and raised on land stewared by Ohlone people with parents who were immigrants from Batangas and Tarlac in the Philippines.  Dr. Tintiangco-Cubales is an award-winning professor in the College of Ethnic Studies at San Francisco State University. Since 2000, she’s been teaching in the Asian American Studies Department with a focus on Filipina/x/o (American) Studies. She is also an affiliated faculty member in the Educational Leadership Doctoral Program. She has mentored hundreds of critical master’s and doctoral students who are now teaching and working in schools, colleges, and community organizations across the nation.  She is also the co-founder and director of Community Responsive Education (CRE), a firm that supports youth wellness through research and the development of responsive, equitable, and justice-driven educators.

In 2001, she founded Pin@y Educational Partnerships (PEP), a “barangay” that focuses on providing schools with Ethnic Studies courses and curriculum, developing radical educators, and creating resources for Filipina/x/o communities and similarly marginalized people. She has worked with several school districts throughout the nation, including the San Francisco Unified School District, to co-develop Ethnic Studies, Social Justice, and Filipino Language curriculum. She is the author of four books of curriculum and numerous articles focused on the applications of critical pedagogy, Ethnic Studies curriculum, Motherscholarship, and Pinayism.   Allyson coined Pinayism in 1995 and has stayed committed to developing Pinay sisterhood and she currently sits on the board of Pinayista. She also prides herself in being a “cheerleader” who supports many people to find their sacred purpose so that they can contribute to community actualization.

Allyson is a loving partner to Val Tintiangco-Cubales, a phenomenal teacher and leader and the mother of Mahalaya, a prolific dancer and artist.  Allyson is also a close collaborator, and best friend to Dr. Dawn Bohulano Mabalon, premier historian of Filipina/x/o American Studies.  For over 25 years, Allyson and Dawn worked on many projects together including their publications, their poetry, their projects, and their Pinayism.  Allyson also worked with her former students/PEP teachers to develop the curriculum for Dawn and Gayle’s book, Journey for Justice:  The Life of Larry Itliong.  With a background in performing arts and as a professor of Filipina/x/o American Literature and Art, she is excited to be the Educational Consultant on this project.

Grow your business.
Today is the day to build the business of your dreams. Share your mission with the world — and blow your customers away.
Start Now